Edit
watch 01:36
We're Getting Mutants in the MCU - The Loop
Do you like this video?
Play Sound
Adam DeMamp 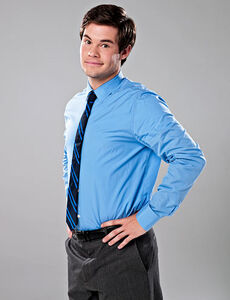 Adam DeMamp is a character in the show Workaholics. He is portrayed by comedian Adam DeVine.

He’s the guy at the party who’s EVERYONE’s friend, but won’t remember one name. He gregariously skates through life on his self – proclaimed animal magnetism. Adam’s a dim bulb, but his gift of gab makes him a born salesman and he actually likes his job because he’s good at it. He never prepares. Strictly instinct. Which sometimes works out and always leaves people in his wake. Adam constantly hits on his boss, Alice Murphy, but she constantly shoots him down in the most insulting ways.Overall, he’s someone you’d want to work with, not because you can trust him – you can’t – but because he’s probably got a sixer of Rolling Rock on his desk.

Adam is considered the dumbest and most troublesome of the three due to his fun-all-the-time mentality. However, his talkative, yet friendly attitude allows him to acquire friends and being a successful salesman. He enjoys drugs, buttfun, and drinking, especially Rolling Rock beer. In addition, Adam enjoys money. In "In the Line of Getting Fired", he urges his friends to kill the CEO, Mr. Benson, for $10,000; money actually offered by Mr. Benson himself. He also likes bhuts!

Adam returns and continues to be the center of trouble. For example, when the trio swears off alcohol for a week, Adam cannot handle it and tries to bring down Blake and Anders with him. In addition, he tries very hard to become the "face" for TelAmeriCorp and serve as a model. He is jealous of Alice selecting Anders to be the company's model and challenges him to a fight. During the fight, Adam chokes on his piece of gum and Alice intervenes by performing a Heimlich maneuver to save him. He is able to spit out the gum, but pretends to still be choking to be sexually satisfied by Alice grabbing him.

Community content is available under CC-BY-SA unless otherwise noted.
Advertisement